In 1976, Englishman Steven Spurrier organized a blind tasting, pitting Napa Cabernet Sauvignon and Chardonnay against top-notch Red Bordeaux and White Burgundy. When the final scores were tallied, a Californian wine came out on top in both the red and white categories. The tasting became known as the Judgement of Paris and was depicted in the Hollywood film Bottleshock.

During the Wine Writer’s Symposium Meadowood 2018, we experienced a semi-recreation of that tasting (at 5:26 in the above video). Mr. Spurrier, the Napa Valley Vintners, and the Wine Writer’s Symposium organized a tasting that included young and mature vintages of Cabernet Sauvignon (and one Chardonnay) from the producers who were represented in that monumental 1976 tasting. 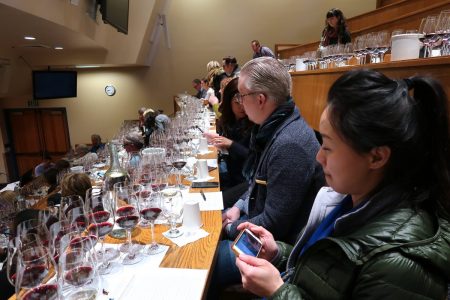 The panel that led the discussion consisted of Steven Spurrier, Lettie Teague (Wall Street Journal), Amy Wislocki (Decanter), Jim Gordon (Wines & Vines, Wine Enthusiast). Needless to say, everyone, including the panel and other participants, were impressed with the wines. Mr. Spurrier and Charine came away really impressed with both of the Cabernets Mayacamas. I was a big fan of both of the wines from Heitz Cellars. Both Charine and I were impressed with how well the 1979 Clos Du Val had aged.

Napa strives to create wines that are approachable young, yet age gracefully. It was an eye-opening experience for us to do this comparative tasting. All the young wines were approachable and the mature ones still had life left. A common theme we saw during the week was that 2014 Napa Cabernet Sauvignon is plush and very drinkable now while the 2013s are firm and highly structured wines that need more time in the bottle.

Here are the wines in the order we tasted them.

You can find out more about our scoring system on the Wine Rating page.

This barrel fermented Chardonnay tastes a lot younger than it actually is. The Chateau Montelena Chardonnay is oaky and full yet very well made. Full of honey and bright pineapple flavors with a touch of salinity. This has a subtly powerful finish which makes it a thinking wine. I would prefer a little more acidity but this is very good nonetheless.   4.3/5


This single vineyard wine is 100% Cabernet Sauvignon. The Clos Du Val Hirondelle Vineayrd Cabernet Sauvignon from Stag’s Leap Districti is medium bodied and very sleek. It has flavors of violets, blackberry, and graphite. It has a tight mouthfeel and a long, spicy finish. Balanced and delicious to drink now but built for some serious aging.   4.6/5

This single vineyard wine has a small amount of Merlot in the blend. The Freemark Abbey Bosche Vineyard Cabernet Sauvignon from Rutherford is medium bodied with bright acidity. For a soft vintage like 2014, this has firm, mouth-coating tannins. Full of violets, dark plum, and a lot of oak.   4.3/5

Majority of this wine is Cabernet Sauvignon with small amounts of Cabernet Franc, Merlot, and Petit Verdot. The Spring Mountain Vineyard, Elivette Red Wine Blend is full of violets, rose, chalk, black fruit, and herbal flavors. It feels lean at first sip but spreads its wings on the palate. Firm tannins and tight structure.   4.4/5

This is the first release from the Linda Falls Vineyard located in the Howell Mountain AVA. The Heitz Wine Cellars Linda Falls Vineyard Cabernet Sauvignon is a knockout. Full of black fruit with a savory soy sauce component. It’s full and round with powerful fruit intensity. The wine is impeccably balanced with a spicy finish.   4.8/5

Made from 100% Cabernet Sauvignon, the Mayacamas Cabernet Sauvignon is elegant and big at the same time. It’s full of cherry pie, capsicum, and graphite flavors. The tannins are firm and the fruit is bright. European in style with a tangy finish.   4.5/5 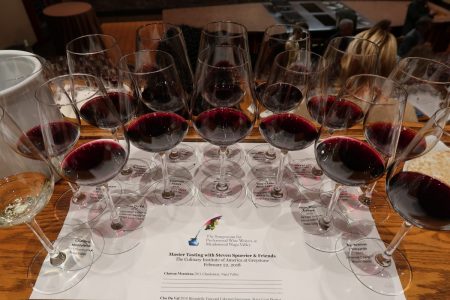 Majority of this wine contains Cabernet Sauvignon with small amounts of Cabernet Franc, Merlot, and Petit Verdot. The Spring Mountain Vineyard Elivette Red Wine Blend shows a lot of tertiary notes. It’s full of tomato leaf, capsicum, and dark fruit. It’s medium bodied with a hickory smoke finish. The tannins are firm and may not ever soften but it’s delicious.   4.3/5

Made of 100% Cabernet Sauvignon from the Calistoga AVA. Chateau Montelena Estate Cabernet Sauvignon has an intense nose. It’s a big wine with flavors of graphite, herbs, tobacco, and stewed cherry flavors. It’s rich and ripe with an orange peel finish. For fans of massive reds.  4.4/5

The 2004 vintage of this staple from Mayacamas has a small amount of Cabernet Franc and Merlot added to the blend. This has very old world flavors of leafy greens, graphite, and dark fruit. This is bright and vibrant for an older wine. The tangy acidity stretches out the long finish.   4.6/5

This vintage consists of 15% Merlot in addition to the Cabernet Sauvignon. The Freemark Abbey Bosche Vineyard Cabernet Sauvignon from Rutherford has a tight nose which is not as expressive as the palate. It’s full of tomato leaf, tobacco, and red licorice. The nose feels tired but the palate brings you back with intense dark fruit flavors. Citrus finish.   4.4/5


Made of 100% Cabernet Sauvignon from this famous Oakville AVA vineyard, the Heitz Wine Cellars Martha’s Vineyard Cabernet Sauvignon 1997 is a spectacular wine. It’s intense and explosive on the nose with herb soy sauce, rubber, and black fruit flavors. It’s creamy on the palate with developed tannins and a sweet tobacco finish. The structure and finish remind me of a great Rioja Gran Reserva. This wine had the most pronounced tertiary (aging) notes among the mature wines.  4.8/5


The 1994 SLV has a microscopic amount (0.1%) of Petit Verdot in the blend. This beauty from Stag’s Leap Wine Cellars is still drinking well now and has more life ahead of it. There are flavors here of black cherry, baking spice, and graphite. It’s medium bodied with lively acidity. The acid, tannins, fruit, and tertiary notes are in balance.   4.5/5

Tasting this wine was a real treat, it has a small amount of Cabernet Franc and Merlot. The Clus Du Val Cabernet Sauvignon Reserve drinks extremely well and has a lot of life left in it. Flavors of Mediterranean herbs, rubber, tobacco, and stewed cherry accompany the smooth mouthfeel. This has subtly powerful flavors with a lingering finish.   4.7/5

The opinions expressed in this article are unsolicited and have not been paid for in any way. We do not sell editorial content as that would destroy the legitimacy of our reviews and the trust between Exotic Wine Travel and its readers.